Reaction Engines Ltd. today began construction of a new engine test facility where it plans to undertake the first ground based demonstration of its revolutionary SABRE™ air-breathing rocket engine. 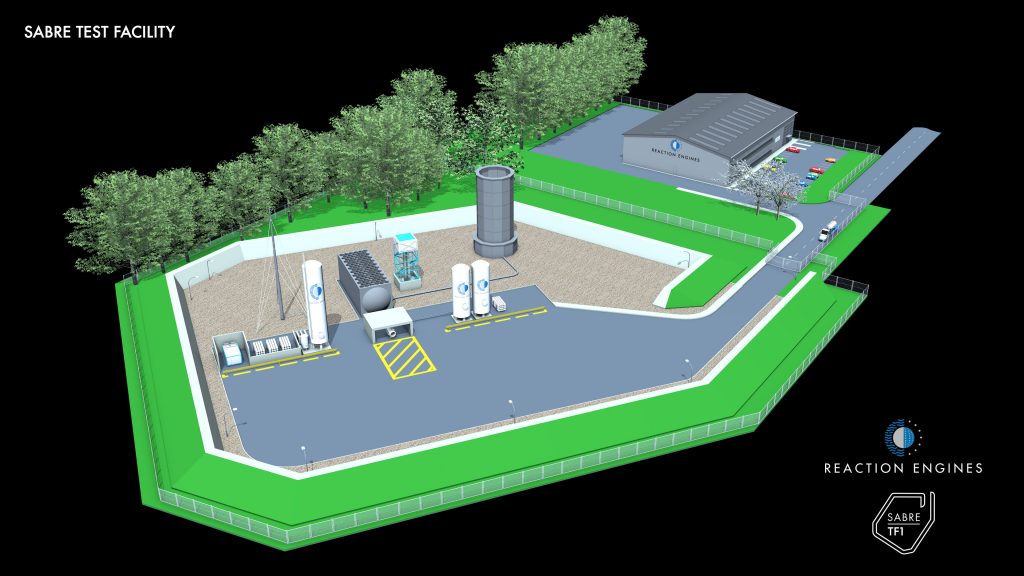 The test facility at Westcott, Buckinghamshire, UK  will enable Reaction Engines to test critical subsystems along with the testing of a SABRE engine core, which will commence in 2020. The project represents a substantial investment for Reaction Engines, which will consist of a multi-purpose propulsion test stand designed to accommodate various test engine configurations, an assembly building, workshops, offices and control room.  The location of workshops and other support facilities alongside the test stand will enable configuration changes to the engine to take place at the site, reducing the down time between testing phases and accelerating the development programme of the SABRE engine. To mark the start of construction, Mark Thomas, CEO, Reaction Engines undertook a ground breaking ceremony with Franco Ongaro, Director of Technology, Engineering and Quality, European Space Agency (ESA); Dr. Chris Castelli, Director, Programmes, UK Space Agency and Richard Harrington, CEO, Buckinghamshire Thames Valley LEP. Mark Thomas, CEO, Reaction Engines said: “This is another exciting step forward in development of Reaction Engines’ SABRE engine and a visible demonstration of the UK’s commitment to the programme.  I look forward to seeing this unique facility take shape and commencing our core engine testing, which will be a defining moment for aerospace.” Franco Ongaro, Director of Technology, Engineering and Quality, ESA said: “The opening of this new test facility at Westcott Today marks an historical moment for the European Aerospace industry and for the UK research and development in rocket propulsion. This facility will enable the ground test of the SABRE engine cycle, opening the way to the first flight tests, and to a new era. The European Space Agency is proud of this partnership with industry and the UK Space Agency, to which we bring our technical competence, which has supported the SABRE development to this stage, and we are confident, to its future flight success.” The construction of the SABRE engine test facility is a significant milestone. The company has already successfully undertaken testing of the engine’s pre-cooler and thrust chamber technologies, and will undertake further ground-based high-temperature testing of the pre-cooler early in 2018. The test facility is located in the Westcott Venture Park, a location with a strong history of rocket propulsion research, having been used to test various UK rocket projects since 1946, including the Blue Streak and Black Arrow programmes. In 2016 the UK Space Agency selected Westcott as the UK’s National Space Propulsion Test Facility and the site is now home to a number of space propulsion and satellite technology companies.

Westcott Venture Park, owned by Rockspring Hanover Property Unit Trust, is a former Government Research Facility and today offers a wide range of industrial / office accommodation with units ranging from 120 sq ft up to 30,000 sq ft. Located between Aylesbury and Bicester, it is the largest business park in Buckinghamshire with major occupiers including FedEx, Shanks, BAE Systems, Moog, and with Bucks Recycling, Ecopac, Green Retreats and Total Carbide occupying five former aircraft hangars. Westcott Venture Park has successfully completed the letting of the first phase of the Century Court development, which has resulted in all seven units totalling 24,000 sq ft being fully occupied. In 2016 Westcott Venture Park celebrated 70 years since the park became the Guided Projectile Establishment and therefore the home of rocket propulsion research in the UK. Planning Permission for Reaction Engines test facility was approved on 28th April 2017 and the application for Hazardous Substance Consent has gained approval from HSE and is now going through the remainder of the planning process with the local council.   For further information, visit: www.westcottventurepark.co.uk

Reaction Engines Limited (‘Reaction Engines’) is a privately held, growing, company based in Culham, Oxfordshire, UK. It employs over 100 people, many of whom are aerospace engineers and apprentices. It was founded in 1989 to develop the technologies needed for an advanced combined cycle air-breathing rocket engine class called SABRE™ (Synergetic Air-Breathing Rocket Engine) which is a leading contender for the next generation of hypersonic flight and space access vehicles. SABRE is an innovative new class of aerospace propulsion that has the potential to provide efficient air-breathing thrust from standstill on the runway to speeds above five times the speed of sound in the atmosphere. A SABRE engine can then transition to a rocket mode of operation, allowing spaceflight at up to orbital velocity, equivalent to twenty five times the speed of sound. Through its ability to ‘breathe’ air from the atmosphere, SABRE offers a significant reduction in propellant consumption and weight compared to conventional rocket engines which have to carry their own oxygen. Ground test and development programme

There are three core building blocks to the SABRE engine technology, the pre-cooler, the engine core and the thrust chamber. Each of these systems can be developed and validated using ground based demonstrations which saves cost and time relative to flight test, a design feature that benefitted the development of the piston/propeller and jet engine. Reaction Engines plan to mature each of these independently over the next four years, with a high temperature test of the pre cooler planned early 2018. Investment

Reaction Engines has received significant capital from private investors and public funding, which will support its transition from a successful research phase into development and testing of the engine. In 2013, the UK Government announced a £60m commitment to aid preparations for the design, manufacture and testing of a SABRE demonstrator engine. In 2015, the Company announced that BAE Systems had made a strategic investment in the company and committed to a working collaboration to accelerate the development of the engine. Orbital Launch Vehicles

As a step change in propulsion, SABRE-class engines have the potential to truly revolutionise the space launch industry. The high efficiency of a SABRE engine and the elimination of the need to carry on-board oxidizer during air-breathing flight segments, enable the development of single stage or two stage space launch system with aircraft-like horizontal take-off and landing operations, resulting in lower cost infrastructure, and mission timelines while increasing responsiveness and system reusability. In addition, SABRE powered launch vehicles can be designed with the ability to abort their mission and return to base- an attribute that will drive significant improvements in the reliability of space launch Hypersonic Mission Applications

The SABRE-class is capable of achieving air-breathing flight from Mach 0 to Mach 5+ as a single propulsion installation and is well suited for a variety of potential high-speed mission areas. SABRE enables more capable high-speed vehicles to be designed and the engine’s rocket mode adds the additional flexibility to increase thrust or transition to sub-orbital flight. Hypersonic Transport

SABRE-class engines have the potential to make the world smaller through high-speed point-to-point transport. To demonstrate the uses for SABRE engine technology in Mach 5 cruise applications, Reaction Engines engaged in a 50% EU-funded project as part of Framework 6, called LAPCAT — Long-term Advanced Propulsion Concepts and Technologies. This study examined the technologies required to reduce long-distance flights, e.g. From Brussels to Sydney, to just over 4 hours while cruising at Mach 5. Other applications

Reaction Engines heat exchanger technology has the potential to revolutionise the approach to thermal management across a range of industries, from aerospace to motorsport, industrial processes, and the energy sector.     For further information please contact: