Callum Tinson, an apprentice technician on our Advanced Level 3 apprenticeship scheme, won the prestigious Freemen of Oxford Apprentice of the Year award last week at Oxford town hall. With this award coming hot on the heels of another award for outstanding academic performance and attitude which he won at the end of 2019 from JTL Training, Callum is quickly becoming one of Reaction Engines’ brightest rising stars. 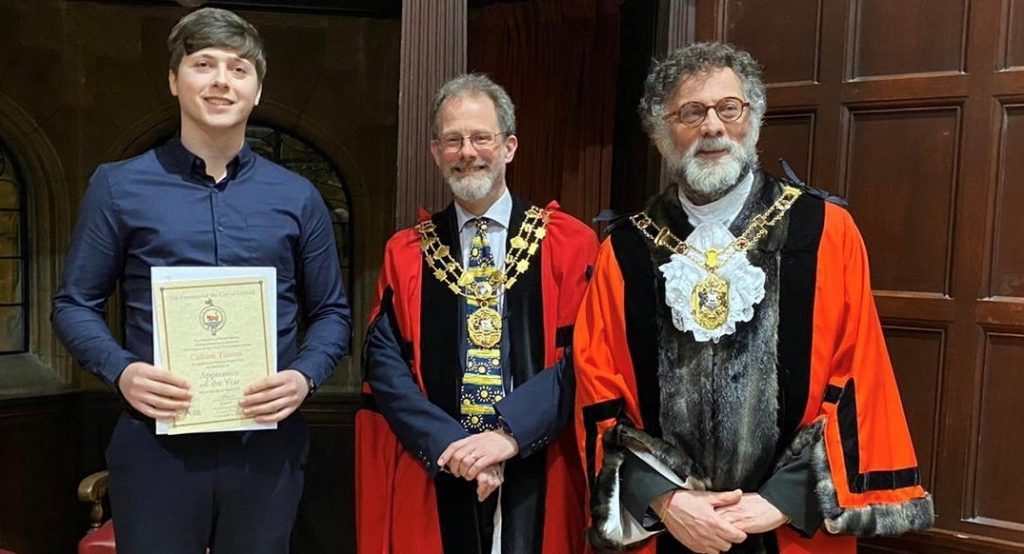 The Freemen of Oxford Apprentice Awards are held annually and seek to recognise the best and brightest young apprentices in Oxfordshire. The Apprentice of the Year award is awarded to the very top apprentice for strong work ethic, enthusiasm, professional development, and academic achievement. Adam Bampton, Callum’s mentor technician, recognised these traits in Callum’s work early on and was pleased to be able to nominate him for the award. He had this to say;

“It was an easy decision to nominate Callum for Apprentice of the Year. He is a hard-working young man who shows initiative beyond his years and has quickly become an integral part of the team”.

Callum was studying for A Levels in maths, physics and engineering and was pondering whether to study for an engineering degree at university or to go straight into industry afterwards. After enjoyable work experience placements with MINI and Unilever, he knew that he wanted to get started right away. He found that he could gain valuable practical experience and still study towards formal qualifications by entering an advanced apprenticeship scheme. He had several offers on the table from top engineering companies, including one from a certain championship-winning Formula One team, but the lure of working on technology that could revolutionise space access and hypersonic flight sold him on Reaction Engines.

Callum had this to say:

“I chose to do my apprenticeship with Reaction Engines for a few reasons. Firstly I was just blown away by what the team are trying to achieve. I think Reaction Engines is a special company – when I started looking into what they do, I had never seen anything like it and I knew I wanted to be a part of it. I was also impressed with the scheme itself, it gives me the flexibility to gain exposure to various parts of the business and to try lots of different things. This flexibility does not exist in many other companies’ schemes, they can be quite limited in scope. With Reaction Engines I have been involved in many exciting projects in different departments.”

Callum started his journey at Reaction Engines in Advanced Manufacturing working on our groundbreaking HTX programme. During this time he worked on plating HTX tubes, assembling and hydrostatically testing HTX modules which were then used in the precooler test article which was tested at temperatures representative of Mach 5! From here he moved into our machine shop where he gained experience in manual and CNC machining. Next up was designing and assembling a rig for testing flexible hoses for our Demo-A programme. Callum is now working in engineering design using state of the art technology to make design modifications to our latest heat exchanger programme.

As for what the future holds for Callum, he is passionate about design engineering and this is where he sees his career heading. He is currently working towards his HNC Level 4 and hopes to complete a full bachelor’s degree in due course.

Finally, Mark Thomas, CEO of Reaction Engines, had this to say regarding Callum’s achievement;

“We are very proud of Callum being named Apprentice of the Year, but not surprised! Callum is a talented technician and a real asset to Reaction Engines. Our apprentices play a vital role in the development of SABRE and are given a lot of responsibility early in their engineering careers. Callum’s achievement is well-deserved recognition of his dedication, enthusiasm and initiative.” 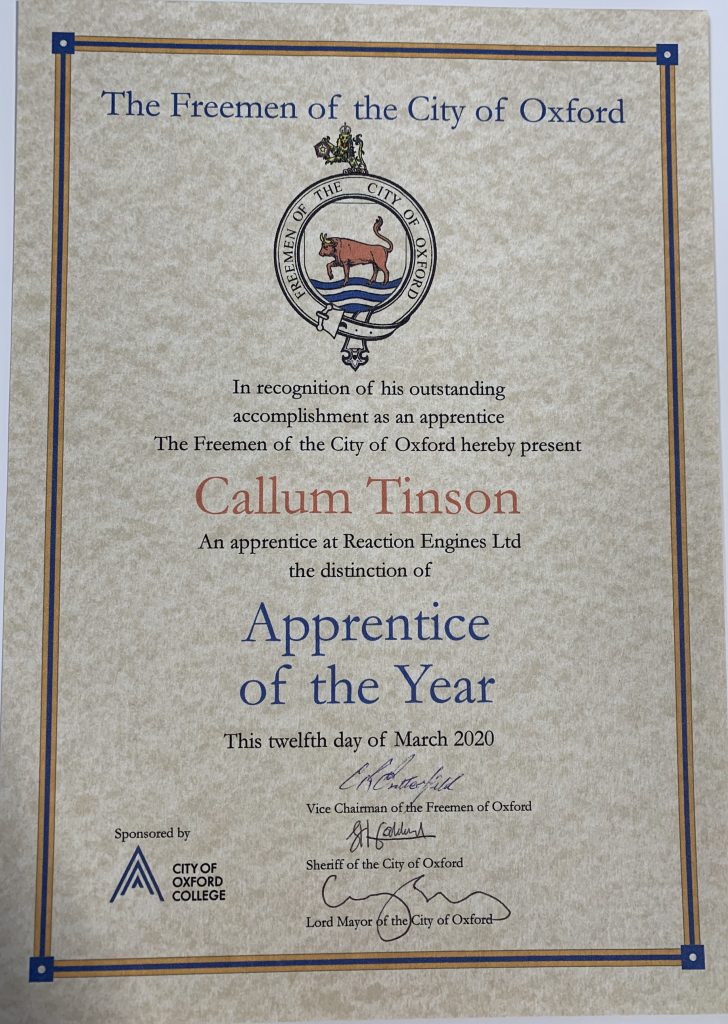 The Reaction Engines Advanced Level 3 Apprenticeship Scheme is now open. We have vacancies for electrical and mechanical engineering apprentices. Please contact us on recruitment@reactionengines.co.uk for more information.

About Freemen of Oxford

The Freemen of Oxford are Oxford’s most ancient body.  They were founded as guilds of merchants and craftsmen. Being a Freeman of Oxford was important as only Freemen could enter into business as a master or journeyman within the boundaries of the City. As a craft guild organization, one of the Freemen’s most significant activities has been the promotion and encouragement of apprenticeships. The Apprentice Award Scheme is an opportunity to promote this theme in the 21st Century.