See below for the official ATI press release:

The report “The UK Vision for Zero-Carbon Emission Air Travel” marks the conclusion of a 12-month study which set out to consider the feasibility of zero-carbon emission aircraft. The project concludes aviation can achieve net zero 2050 through the development of both sustainable aviation fuel (SAF) and green liquid hydrogen technologies.

To secure market share on new hydrogen-powered aircraft, UK companies must be ready to demonstrate technologies by 2025. This timescale is key for new zero-carbon emission aircraft to enter service by 2035 and to achieve the net zero 2050 target.

Led by the Aerospace Technology Institute and backed by the UK government, FlyZero has concluded that green liquid hydrogen is the optimum fuel for zero-carbon emission flight and could power a midsize aircraft with 280 passengers from London to San Francisco directly, or from London to Auckland with just one stop. 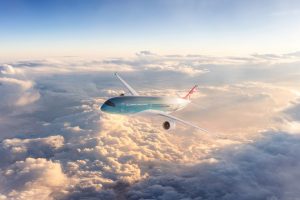 The UK can build on decades of expertise in aerospace innovation to propel a new generation of liquid hydrogen-powered aircraft into our skies, working with global OEMs, governments, and regulatory bodies. With targeted investment in technology, the UK could grow its market share in civil aerospace from 12% today to 19% by 2050, increasing the sector’s gross value added to the economy from £11bn to £36bn and the number of aerospace jobs from 116,000 to 154,000.

The report sets out how aviation can keep businesses, cultures, families and nations connected without the carbon footprint. Realising this presents challenges for all facets of our aerospace and aviation sectors as well as wider industries and energy infrastructure. An integrated, collaborative, international approach to these challenges is needed to protect our planet, maintain the benefits of aviation and secure economic growth.

In parallel, the UK must also continue to advance technologies required for sustainable aviation fuels (SAF) as both SAF and liquid hydrogen are needed to achieve the net zero 2050 target.

Chris Gear, project director said: “Zero-carbon emission flight can be a reality. Tackling the challenge of our generation requires accelerated technology development and urgent investment in green energy together with regulatory and infrastructure changes.

“The next three years are crucial to develop the technologies, build our skills in liquid hydrogen and demonstrate capability here in the UK to enable our aerospace sector and supply chain to secure its role in a new era for aviation.

“Realising hydrogen powered flight by 2035 is a huge challenge but is essential if we are to maintain the social and economic benefits of air travel while protecting our planet and meeting our commitments to fight climate change.”

Industry Minister Lee Rowley said: “Realising zero carbon flight is one of the most ambitious challenges we can contemplate. However, it could also be one of the biggest economic opportunities for the UK’s world leading aerospace sector.

“It’s great to see FlyZero’s final outputs following a year of intense research, successfully bringing UK industry together to think through how to reduce aviation’s impact on our Earth and sky while ensuring and celebrating the immense benefits of air travel and connecting the world.”

The report published today summarises FlyZero’s findings in a range of key areas:

The FlyZero project is publishing its detailed conclusions through a series of reports which explore the technology challenges, manufacturing demands, operational requirements, market opportunity and sustainability credentials of zero-carbon emission commercial aircraft. A series of more detailed and technical reports together with new supporting research from industry and academia are also available to organisations that meet the requirements of an access test. For a full list of reports and information on how to access them, visit ati.org.uk/flyzero-reports.

The FlyZero project has made some initial conclusions that require further investigation and investment to understand the feasibility and approach to innovation for the next phase. To this end the Aerospace Technology Institute (ATI) will incorporate the findings from the project into its forthcoming technology and portfolio strategies and look to pursue opportunities for the UK.

About the Aerospace Technology Institute

The Aerospace Technology Institute (ATI) is at the heart of UK aerospace R&T. Working collaboratively across the UK aerospace sector and beyond, the Institute sets the national technology strategy to reflect the sector’s vision and ambition, supporting a range of advanced technologies with the aim of reducing aviation’s environmental impact. The ATI Programme is a joint government and industry commitment to invest £3.9 billion in research to 2026. In addition to the ATI Programme and FlyZero, the Institute also supports the supply chain through NATEP.

Led by the Aerospace Technology Institute and backed by the UK government, FlyZero began in early 2021 as an intensive research project investigating zero-carbon emission commercial flight.

This independent study has brought together experts from across the UK to assess the design challenges, manufacturing demands, operational requirements and market opportunity of potential zero-carbon emission aircraft concepts. FlyZero will shape the future of global aviation with the intention of gearing up the UK to stand at the forefront of sustainable flight in design, manufacture, technology and skills for years to come.

FlyZero is funded by the Department for Business, Energy and Industrial Strategy.

[1] Four gigaton accumulative reduction compared to forecasted growth in passenger numbers with no hydrogen aircraft in service. Annual carbon emissions based on 2019 data of one gigaton CO2 per year.